From the Malta Independent 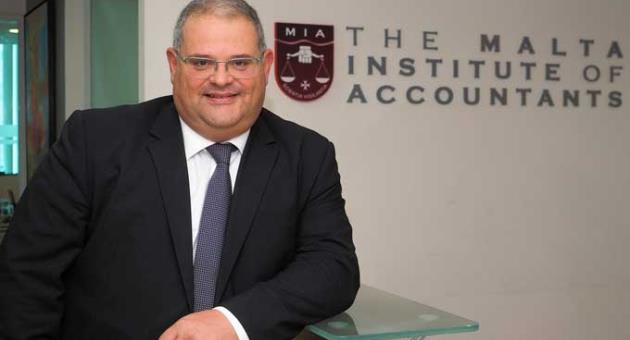 Last July, the Malta Institute of Accountants (MIA) elected its new President, William Spiteri Bailey, who sat down with The Malta Independent on Sunday to talk about the accounting profession and the preparations being made to gear up Malta's professional accountants for the new digital era which will inevitably change the framework within which these professionals work and, at the same time, add value to the profession.

Spiteri Bailey is a partner at RSM and specialises in business advisory and risk management services. Regarding one of the tasks he took upon himself as MIA President, he talked about a conference being planned for the last quarter of this year. This will be geared towards providing a deeper understanding of various topics such as distributed ledger and blockchain technology, cryptocurrency and how all these will have an impact on the way the accounting world will be changing.

Asked if Malta is prepared for these changes, Spiteri Bailey said that Malta is gearing up and that currently there is a consultation process on three blockchain-related bills, at the conclusion of which it is expected that the legislation will be presented to Parliament. In addition, the Malta Gaming Authority (MGA) has also published proposed guidance on using distributed ledger technology and cryptocurrencies in the nation's online gaming space.

Spiteri Bailey boldly stated that "Blockchain is the future of the Internet of things, a complex network of connected devices that can collect and transmit data.

Giving examples of how, exactly, this will have an impact on the accounting profession, he said: "Look at auditors; their role will change in the way they audit accounts. This is because all the data will be entered into the blockchain, auditors will have access to the particular data, so there will be a change in the way data and information is transmitted to us - it will change the way we work.

"In Malta, accounting is done through software, where the client receives the invoices, expenses etc., and they are entered into the accounting system.

"Overseas, the accounting system is on the cloud, the client scans the invoice into the system and it goes directly into the account. So the accountant abroad does not actually input any invoices, but analyses and gives information to the client."

Spiteri Bailey said that role of the MIA is to lead, train, support and promote the profession of accountancy and serve the public interest. "We help our members  by ensuring that the values of independence, diligence and integrity are adhered to."

Spiteri Bailey pointed out that the MIA is now attracting between 200 and 250 new graduates every year - mostly young members. "My idea is to try and ensure that the Institute is revitalised and rejuvenated as much as possible. This is why we restructured the Committees and now also have a Young Members Committee to start involving and preparing the younger members to become involved in their Institute."

He also emphasised the importance of increasing communication with both its members and with the public at large - a continuation of his predecessor's work. He said that efforts are being made to constantly update members through specifically focused seminars.

He said that efforts are also being made to bring the Institute closer to institutions such as Accountancy Europe and the International Federation of Accountants (IFAC), which is the is the global organisation for the accountancy profession and dedicated to serving the public interest by strengthening the profession and contributing to the development of strong international economies.

"We do this for the benefit of the members themselves. The closer we get to these organisations, the better we can serve our members and the more informed and prepared our members are."

Over the past two years, Malta's financial services have been under the spotlight. Some two years before her brutal murder last October, Daphne Caruana Galizia revealed that Minister Konrad Mizzi and the PM's Chief of Staff Keith Schembri held secret Panama companies. She subsequently also levelled allegations against the PM's wife. All these allegations are currently subject to magisterial inquiries.

In the course of these events, Malta's financial services were called into question, with the Nationalist Party criticising the government for destroying Malta's reputation and the government, in turn, accusing the Opposition of using an important industry as a political football.

Asked about the feeling on the ground within members of the MIA, Spiteri Bailey said: "Supporting Accountants, Promoting the Profession and Serving the Public Interest' - this is our Institute's tagline. And this is what we need to stay intensely focused on, even in difficult times when certain events touch our profession. This may only be done if our members align themselves to the Institute's vision and have regard to professional and ethical standards for the benefit of the accountancy profession and the general public.

"In such circumstances, the members want their Institute to assess and evaluate situations that affect its members and base any conclusions on relevant and pertinent facts of the matter. This is essential in order to safeguard and uphold the public interest and the integrity of the profession."

In the midst of the Panama Papers scandal, the practitioners who assisted Mizzi and Schembri in their offshore dealings were Nexia BT's Brian Tonna and Karl Cini. Against the Code of Ethics, they also provided a loan to Schembri, who is an audit client of theirs.

While the accountancy watchdog prefers to await the results of the relevant magisterial inquiry before considering any action, the MIA had initiated disciplinary procedures which could have seen the memberships of both men being rescinded. Before the MIA could announce its conclusions, they both resigned from the Institute and while the Accountancy Board awaits the results of the inquiry, both Tonna and Cini continue to work.

Apart from other events, Tonna and Cini still assisted Politically Exposed Persons to set up offshore structures, without informing the Tax Commissioner.

Asked about all this, Spiteri Bailey said: "The Institute deals with individual members and not with companies. Based on what I have just said - that the Institute assesses and evaluates situations based on the relevant and pertinent facts of the matter - we began the process of assessing the situation, but both members resigned."

He acknowledged that the MIA had communicated with the board about the matter. "The Accountancy Board has a different role: it is the regulator. It is separate to us and it has different ideas regarding how and when to deal with such situations."

Is it a good time to be an accountant in Malta?

In the light of all this, asked whether it is a good time to be an accountant in Malta, Spiteri Bailey immediately replied that it is indeed a good time. He stressed that, despite the large numbers of professional accountants graduating each year, they are simply not enough.

"Today, the professional accountant is not a person who just sits at a desk and works on accounts. On the contrary, there are so many different areas and niches in which the accountant can work and become an expert on - whether it's accounting, audit, advisory, taxation, management, financial services, gaming and fintech and so many other areas.